Yes, it’s been over a week since the Planned Parenthood Stand With Texas Women bus tour ended. Yes, the bill passed, and yes, this post is late. Sorry, I’ve been busy. But I’ll get to that in another post.

After San Antonio on Day 3, we returned to Austin to stay the night. Friday afternoon, I was back at the capitol – along with hundreds (maybe thousands?) of orange, blue and other colors. I kinda felt sorry for the occasional obvious tourist – but then, what a story to tell about your first visit to the Capitol of Texas.

Friday was mostly a waiting game. Everyone knew that the bill would pass – it was just a matter of time, with the Democratic Senators not necessarily attempting to delay, but rather trying to affect the bill through amendments. All proposed amendments were tabled by Republican sponsors.

As for me, I spent some time getting atmosphere pics – long lines waiting to get into the gallery, masses of orange shirts gathered in the rotunda and elsewhere, interesting signs and faces. It wasn’t until about 5:30 in the evening that things got real for me. Cecile Richards arrived at the Capitol and I spent the next several hours shadowing her. 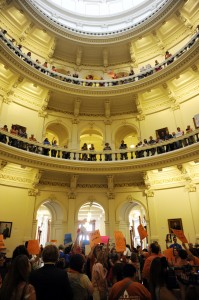 Cecile made the rounds through the Capitol, high-fiving the orange shirts and stopping here and there to join in a chant. It was a pretty fun time, though trying to keep up with her in the crowds was difficult. At one point, she made her way to a hallway outside the Senate floor. Several of the Democratic Senators came out to greet her and provide updates. It felt pretty cool being ‘on the inside’, because I’m sure if I had not been on her heels coming through that door then they would not have let me in.

The original plan was to gather the troops (orange-shirts) on the West steps at 8PM. Everyone expected the bill to pass and the Senators to be out by 9PM – if they wanted to make the 10PM news deadline, that seemed the best plan. The Senators would then join the gathered mass and marshall a march through downtown Austin to a staging point at Republic Square. So of course at 10:30PM we were still in a hallway off the rotunda waiting for the Senators to emerge.

The PPFA people had a permit to march through Austin that expired at 10PM. So, at 9:30, still waiting for word from the Senators, the march happened. A large group of Orange-shirts headed to Republic Square – possibly expecting to be met there by the VIP’s. They waited until about 11:30 – that’s when Cecile boarded the Big Orange Bus and went to tell the masses what was what.

With things winding down in the Senate – they were on closing statements at this point – it was decided that the best thing to do was to march right on back to the Capitol and greet the Democratic Senators on the South steps as they emerged – battered but not defeated. It was amazing watching those people who had a few hours earlier marched out from the Capitol turn and march back – chanting and singing on the way. (They only sang once – as we passed by the Governor’s Mansion, a chorus of ‘Nah Nah Nah Nah, Goodbye’ broke out. Then right back to chanting.) 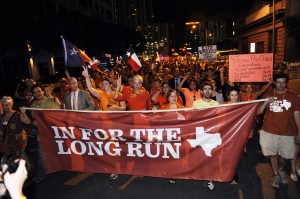 Back at the Capitol the marchers merged with those who had remained inside and a very large crowd was on hand to welcome the Democratic Senators. Speeches were made, people cheered, the media witnessed. Those of us not quick enough or with sharp enough elbows remained on the fringe, while those others formed a tight cocoon around the VIP’s. I’d seen the same thing several times over the past 3 days, so I chose to hang back and look for crowd/wide shots.

Then, the Senators and Cecile went back inside. We climbed back onto the bus for the last time and headed to the hotel. I got a cab home and said goodbye to the Big Orange Bus. 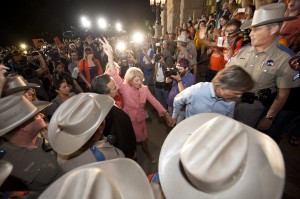 Overall, it was a fun experience. The people were great and the opportunities for photos – scripted though they were – challenged me and forced me to think on my feet and work creatively. The money wasn’t bad either. Yeah, I’d do it again.