For the next several days I will be on the road with Planned Parenthood Action Fund on a Stand With Texas Women bus tour across Texas.

Today we started in Austin at the Capitol building. 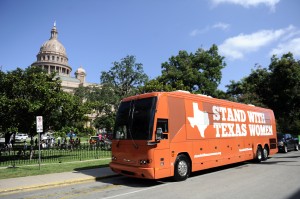 The press event went pretty smoothly. It was interesting to see the pro-life group try to usurp the camera time by moving behind the podium and holding up signs – and then the pro-choice group get between them and the cameras and hold their signs higher. No shouting, pushing or name-calling – just a silent signage war. All very civil.

A minor bump in the road lead to a flat tire minutes from the Capitol. 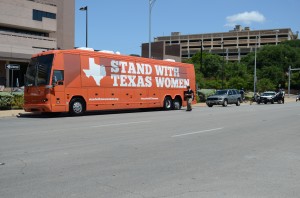 An appearance on the drag was cancelled and the trip to Houston was delayed, but we eventually got on the road. Overall it was a pretty cozy trip. High speed internet, captain’s chairs, Direct TV – and I didn’t have to drive. Every trip to Houston should be like this.

The event in Houston was a bit larger than the one in Austin. They brought maybe 850 people to Discovery Green. Senators spoke, people cheered, I took photos. 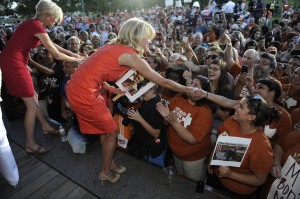 Then it was a long wait until the second bus came around. We transferred our gear to Bus 2 and hit the road to DFW. We should arrive sometime after midnight. Our first event is in Dallas at 10AM – somewhere TBD so far as I know. The Fort Worth event is at 6PM – also TBD last I heard. 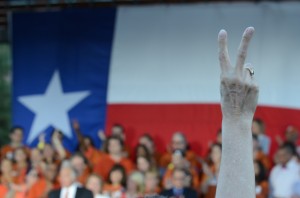