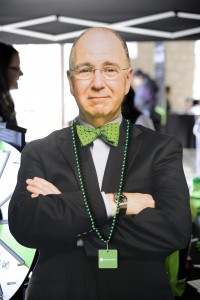 Last week I was hired by HR Block to photograph their town hall convention here in Austin. The job came to me last minute as they scrambled to find an available photographer. The job was straight forward enough and I was open so no problem with the short notice. But when the client called the day before the convention to ask if I could shoot video as well, that seemed a bit iffy.

After making sure that they knew I couldn’t promise anything spectacular I decided to bring what gear I had – a Nikon D7000 and an ME-1 mic – and shoot what I could. After a few hours of your typical convention shots the attendees broke into small groups for some marketing strategizing. While they were doing this, I was to have a helper pull random individuals for testimonial video. Nothing went quite as planned – I got myself set up but no helper was to be found. With no one even wandering the halls, I ended up twiddling my thumbs for a while. On the plus side, I had plenty of time to get my meager gear set. While I wouldn’t recommend this set up to anyone, it ended up doing the job well enough.

When my helper finally arrived and began wrangling people I was ready to go. Instead of testimonials, though, I got ‘This is what I learned/taught today’. And since everyone learned/taught the same thing, I got 8 people telling me the same thing in slightly different ways. Still, if this was what they wanted, who was I to argue?

Only no one seemed to know exactly what they wanted. Apparently the video had been requested by someone other than the person responsible for hiring and directing me. That person had failed to pass along anything other than a general concept of ‘Testimonials’. And since that person ended up being my helper and asking people to answer a question that was not quite testimonial, I didn’t bother questioning the change in tactic.

So I ended up with a few minutes of video with 8 different people answering the question of what they taught/learned that day at the convention – all of which was pretty much the same. After editing and transmitting the pictures, I found out that my contact had no idea what I was supposed to do with these video files. He asked me to go ahead and edit them into a short video – with no direction other than a bare concept that had changed at the last second. Wonderful.

Turns out I really enjoy editing video. Even poor quality video with little to no direction from the client. I spent a few hours playing with iMovie and YouTube audio files and eventually ended up with something passable. I sent it on to the my contact and he approved. I admit, I was surprised. I expected at least a few edits. I guess since no one really knew what the finished product should be that what I sent was as good as anything. And, really, it’s  not that bad.

Well, at least I had fun producing it. And despite this little video snafu, these people were pretty fun to work with.