A while back I donated a portrait session for a silent auction at my son’s Montessori school. It was purchased by the Nana of his best friend that he has known since he was a few months old. She requested the two of them in front of a mural in Austin – something that said ‘I Love You’. I settled on ‘You’re My Butter Half’ – located across the street from Bennu on east MLK. The shoot started rough – hot/humid afternoon and no naps for either model – but once they realized they could roll down the grassy slope things improved. Here’s the set-up shot – with both models and my trusty assistant/model wrangler. No lights/reflectors, 17-55 f2.8 (later 80-200 f2.8) on a d7000. I’ll post edits once  have them. 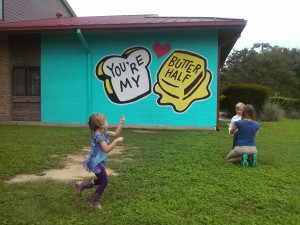